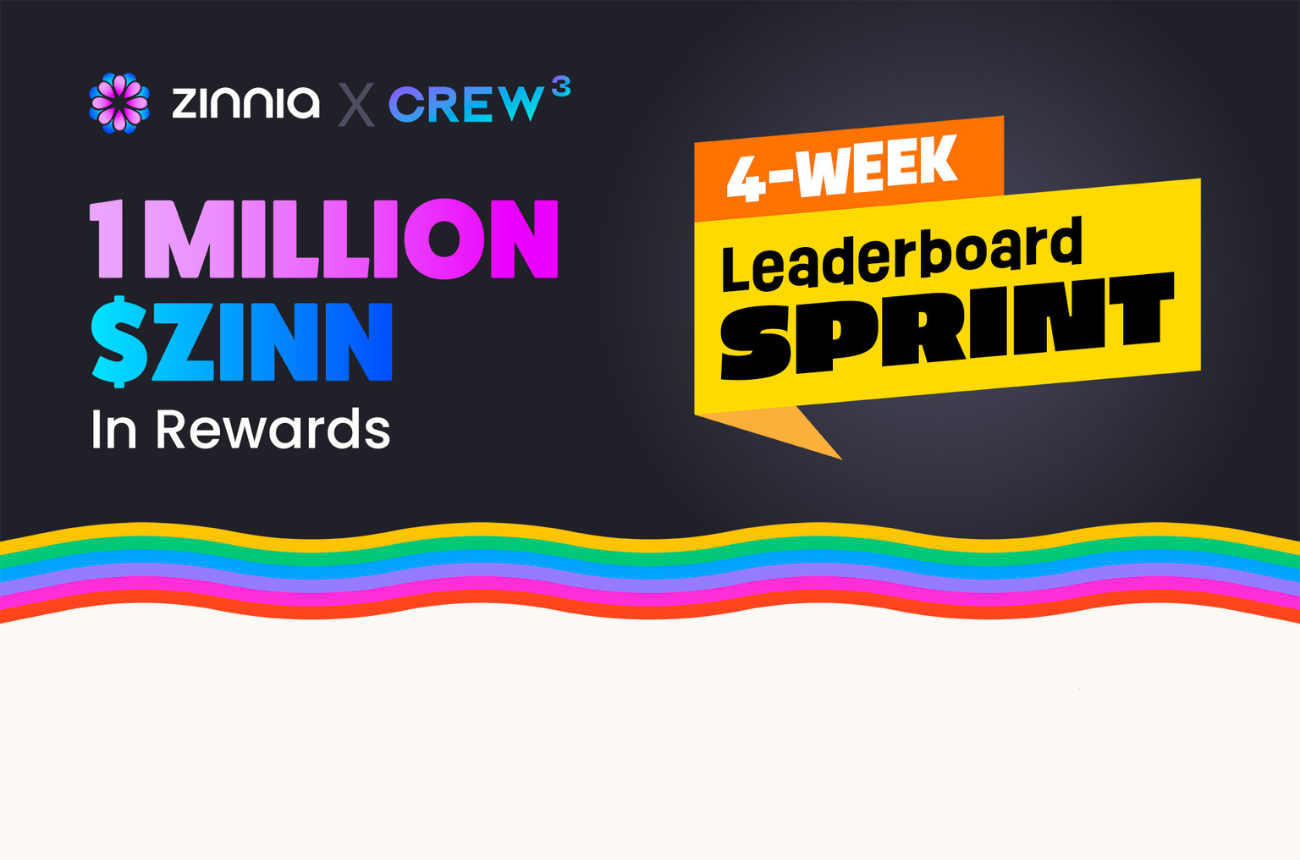 Crew3 is a web-based tool that allows users to join communities primarily focused on Web3 projects and earn rewards by completing tasks referred to as ‘quests.’ The platform links users' social media accounts allowing them to complete multiple quests across platforms without leaving Crew3.

Click here to go to the Zinnia Network page and explore our quests.

Use Crew3 to grow, educate and reward Zinnia Discord and Twitter communities and increase engagement across all social media platforms.

Before we discuss Crew3 in any further detail, it is essential to understand that there are two types of XP available as a reward for completing quests on the Crew3 platform, Discord XP and Crew3 XP.

Discord XP - This does not count towards the 4-Week Leaderboard Sprint and will, therefore, not show on the Crew3 leaderboard. However, it does count towards the member's total Discord XP. Unfortunately, Crew3 does not automatically transfer XP earned on the Crew3 platform to Discord, they do provide a CSV file with members' XP stats, though. This CSV file will be used at the end of every 4-Week Leaderboard Sprint to update Discord with the total amount of XP members' have earned, that's both Discord and Crew3 XP.

Don’t forget that there is 500,000 $ZINN available to reward the Discord members with the most XP before launch!

The above information should make it clear as to why on the Crew3 Leaderboard, some members have completed quests and do not have XP against their name.

The Zinnia Network page works as a funnel, with initial quests requiring completion before subsequent quests will unlock. These initial quests will not have Crew3 XP points attributed to them to avoid newcomers gaining an unfair advantage in later leaderboard sprints. On completion of a quest, the user must provide confirmation in the form of a question and answer system or verification by submitting evidence such as a link or screenshot. The funnel will progress in the following order (subject to change).

It is easier to look at the quests in the following four distinct groups;

These quests are explained above under the paragraph ‘The Crew3 Funnel’. Onboarding Quests need to be completed for a member to become familiar with Zinnia and Crew3 and to link their social media accounts to the platform. These tasks are ‘ONCE ONLY’ and will disappear from the user interface upon completion. Upon completion of all onboarding tasks, members can earn a total of 1750 Discord XP and the titles ZINNIA ADVOCATE and ZINNIA SOCIALITE. Onboarding Quests do not offer a Crew3 XP reward.

It is vital to understand the reason that Onboarding and Learn and Earn Quests do not have Crew3 XP attributed to them. These quests are ‘ONCE ONLY’, and if completion was rewarded with Crew3 XP, it would automatically populate on the Leaderboard, giving new members an advantage over old members in subsequent 4-Week Leaderboard Sprints.

This is why Crew3 XP is not available for Onboarding Quests and Learn and Earn Quests.

Social Media Quests are unlocked once a member has earned the title ZINNIA ADVOCATE and completed the ‘Follow us on Twitter’ Quest. The aim of social media quests is to spread the word about our community across social media platforms by engaging and sharing Zinnia posts. Social media algorithms feed off constant and prompt engagement, for this reason, Social Media Quests will only remain active for the duration of the weekly campaign. On Monday morning, at the start of a new weekly campaign, the previous week's Social Media Quests will be deleted. Zinnia wants to encourage daily activity on Crew3 and prompt engagement with our social media posts, there is no value in members liking and retweeting posts that are a month old.

Social Media Quests have Crew3 XP associated with them, this is where members can boost themselves up not only the Crew3 Leaderboard but the Discord Leaderboard as well.

It is essential that the instructions for Social Media Quests are adhered to, in particular, the Meme Contest. The Meme Contest will have a strict one-entry rule; if a meme does not fit the required criteria, the quest will fail, and no XP will be awarded.

Quiz Quests are unlocked once a member has earned the title ZINNIA ADVOCATE and completed the ‘Follow us on Twitter’ Quest. The aim of Quiz Quests is to educate members about Zinnia so that they can be confident when talking and sharing information about the Zinnia Network.

There are three parts to the quizzes;

At the end of each campaign week, the members who have answered each daily quiz and got at least one correct answer will be entered into a prize draw, with the winning member receiving $50USDC.

Crew3 XP gained through the daily/weekly Social Media and Quiz Quests contribute to the 4-Week Sprint Leaderboard. This is the business end of Crew3 where members battle it out to reach the top!

This leaderboard is entirely separate from Discord and has its own 500k $ZINN fund for rewards. The reward structure is flexible and will be announced on social media and Discord before the start of the sprint. The Crew3 Sprint Tutorial will also be updated at the start of every sprint so that members are aware of the reward structure.

At the end of each 4-Week Leaderboard Sprint the Crew3 XP on the current sprint leaderboard will reset to zero.

Zinnia prides itself on its core values of Ownership, Fairness, Freedom, and Transparency. We take these principles into account in everything that we do and expect the same from our community. Please be creative and submit only your own content, failure to adhere to this will result in penalties.

Community members should be incentivized and excited by the massive amount of XP available on Crew3 through simple daily quests to assist in growing, educating, and rewarding the Zinnia community. Failing to take part in Crew3 will result in Discord members being at risk of dropping out of the XP leaderboard rankings and consequently losing their chance to be rewarded with $ZINN before launch. Stay Active.

Please note -  In line with Zinnia's core principles of fairness and transparency, giveaway tokens will be subject to a cliff and vesting period matching current schedules for all contributors, stakeholders, and team members.

Tokens will become spendable at the following rate:

30% unlock at launch with a subsequent 3-month cliff followed by a 7-month vesting period where 10% will be unlocked monthly.